Team members at Overleaf Lodge & Spa go the extra mile to make our vacation guests feel like family. We are thrilled that so many of our team members have been with us for decades. Meet a few of the people who work hard to make your Yachats getaway a memorable and comfortable one. 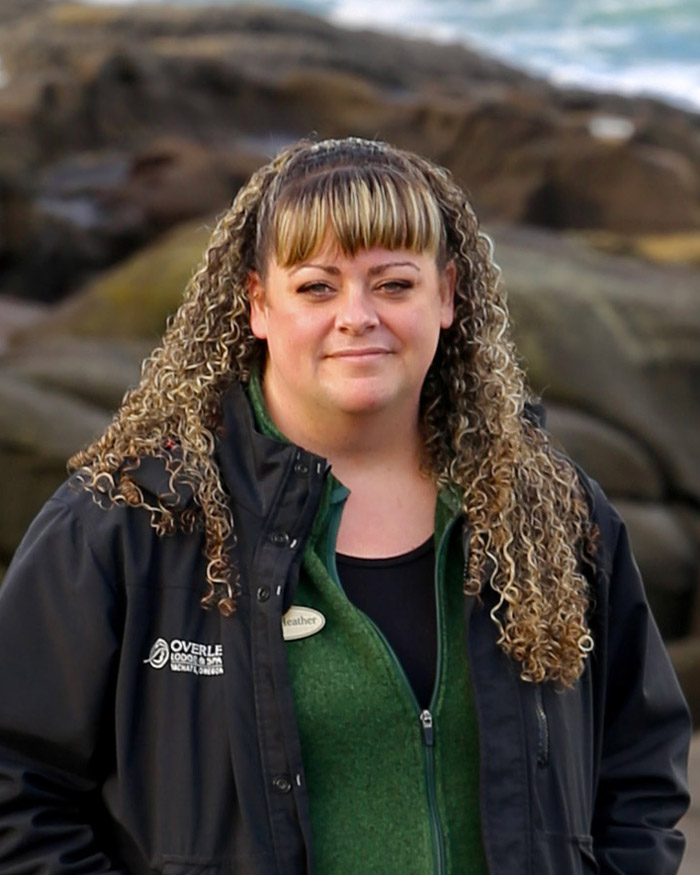 Heather Tincher-Overholser started working at the Overleaf Lodge in 1996, the summer of her freshman year in high school. Since then, Heather has learned all aspects of the hospitality business, excelling at providing exceptional customer service, even earning the Employee of the Year award in 2017 from the Oregon Restaurant & Lodging Association.

Heather is truly committed to making each guest’s stay as comfortable and memorable as possible. She relies on honesty, work ethic and strong connections with the staff to ensure that guests’ needs are being met. “It feels like family, from our team to our guests.”

Working and living at the Oregon Coast is a dream come true for Heather, who came from the Midwest with her mother and twin sister (Val Tincher, Director of Maintenance).

“It now feels like I’ve been here my whole life,” she says. She loves all of it: small-town living, sunrises and sunsets, windy weather, the area’s natural beauty. Two of her favorite spots are the lookout at the top of Cape Perpetua Natural Scenic Area and “The Point” in Yachats State Recreation Area, where she watches the waves and wildlife.

At home, Heather cares for more than 120 houseplants – “I LOVE plants!” She also enjoys cooking for her husband and friends. “There’s nothing better than feeding people good food,” she says. “It truly makes my heart happy.” 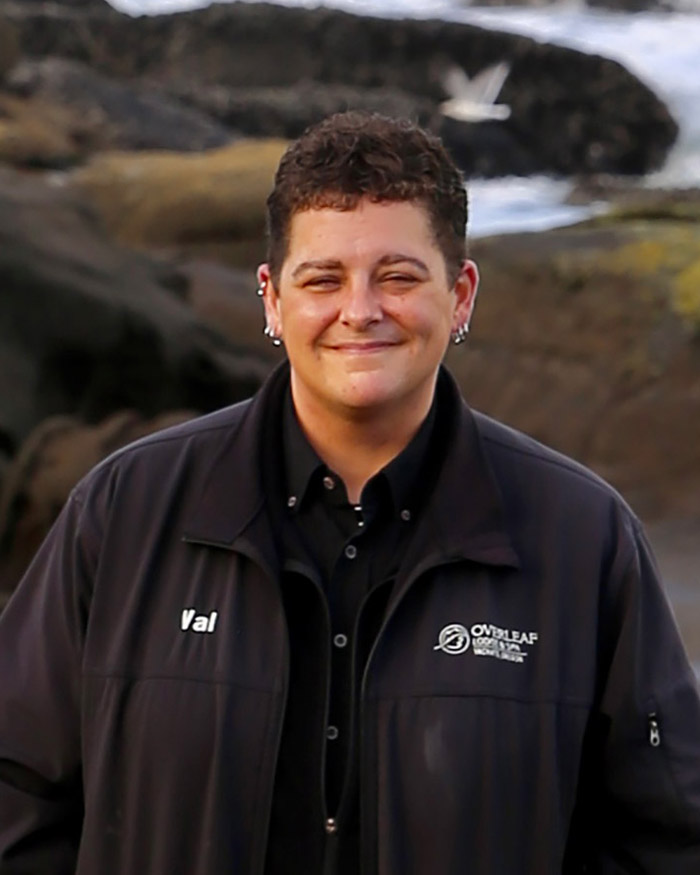 Val and her twin sister, Heather, began working in housekeeping as teenagers in the 1990s. Working here together ever since, they enjoy the camaraderie of having someone who truly understands the job’s ins and outs.

A fixer and builder extraordinaire, Val is our Director of Maintenance. She loves to fix things and make people laugh. Having been with us so long, she knows all of our departments, and helps wherever there is a need. In the summer, she frequently helps make breakfast in the morning, and then helps with housekeeping.

Val appreciates when guests report that something needs to be fixed. Ideally nothing would ever break, but in reality, things do. Nearly always, she can fix it quickly, and she wants every guest’s stay to be positive and unencumbered by a maintenance need. She always does her best to rectify the situation and keep everyone safe.

In her time off, she enjoys spending time with her family and her doggies, gardening and hosting barbeques. Val says, “Life is too short to take things too seriously. Be kind to yourself and others.” 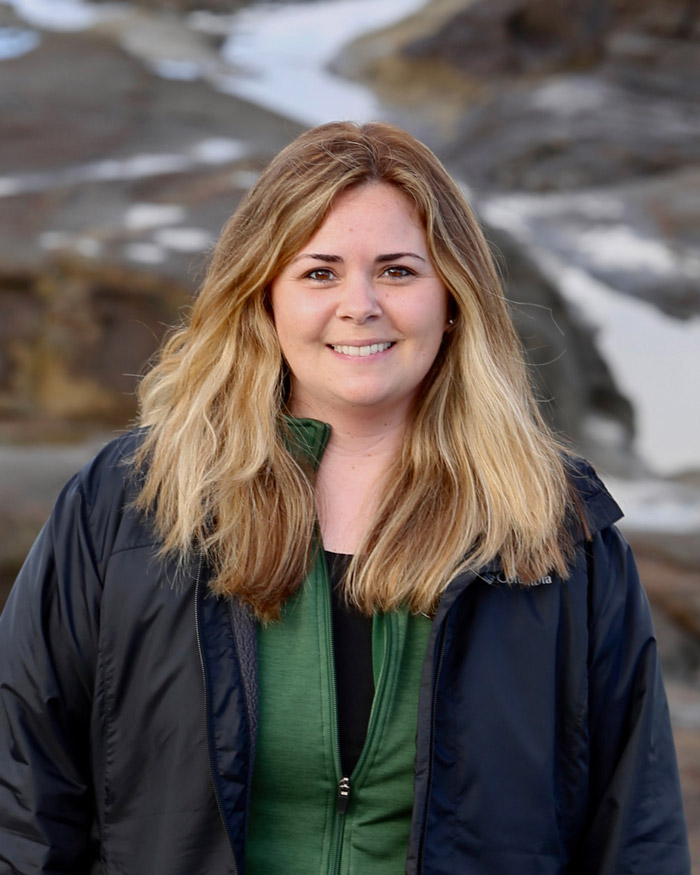 Meet Sheila Villa, our Front Desk Manager and one of our Event Coordinators. When Sheila was 16 years old, her parents told her if she wanted to drive, she needed to pay for car insurance, which meant she needed a job. Sheila soon began working at Overleaf Lodge as a housekeeper.

Over the years, she has worked in the kitchen as a dishwasher and fill-in cook, and has also been the first face guests see at the front desk. When we are short-staffed, she still helps out in our housekeeping department. Counting all the overtime hours she’s worked, she figures she’s been with us for over 50 years!

Sheila enjoys finding ways to create memorable moments for our guests that they will treasure for years to come. She knows that when guests enjoy their stay, they’ll likely return and encourage their friends and family to visit. Although working with the public can be challenging, Sheila appreciates that fact that those who come to Overleaf are usually kind and considerate.

An integral member of our Overleaf family, Sheila values the friendships she’s developed with her Overleaf Lodge teammates. “We have built real friendships together, and we have been through it all together. We have laughed and cried countless times. Having them here with me daily is a blessing. I truly enjoy being around them,” she says.

A native of the Oregon Coast, Sheila loves the misty rain as much as the sunshine. When the weather is cool and wet, she encourages guests to put on a jacket and breathe in the fresh, clean air. In her free time, she and her daughters enjoy going on walks to look for whales and hunt for sand dollars and other beach treasures. 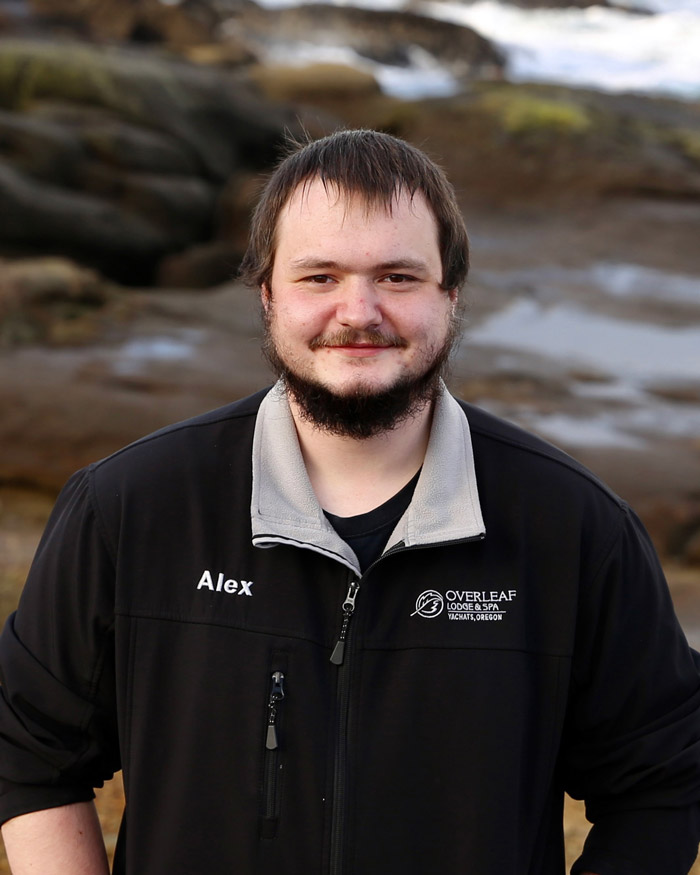 Alex Sheldon, our Director of Housekeeping, has been with us since 2016. Like many of our key staff, Alex started in housekeeping and worked his way through several positions before becoming a part of our management team.

Transforming a room between guests is rewarding for Alex. “I’ve walked past guests as they check into our rooms — hearing them or their kids say “Wow” feels good,” he says.

He also appreciates it when he finds a kind note from a guest after their stay, saying how much they enjoyed their clean, comfortable room during their stay. He encourages all guests to remember to turn off the coffee maker before leaving the room.

Describing his job as fast-paced, Alex loves working with the management team. “Heather, Val and Sheila are just fun individuals,” says Alex. “Even when they’re stressed or tired, we find time to joke or laugh, even if it’s about ourselves. Even with everything that’s going on, our team meetings are bright spots that we look forward to.”

Alex has lived on the Oregon Coast since he was 14 years old, and in the Yachats area since he was 18. He enjoys being near family and living in this quiet community, along our beautiful stretch of the coast. You may bump into him hiking in the area, especially along his favorite route, the Amanda Trail. 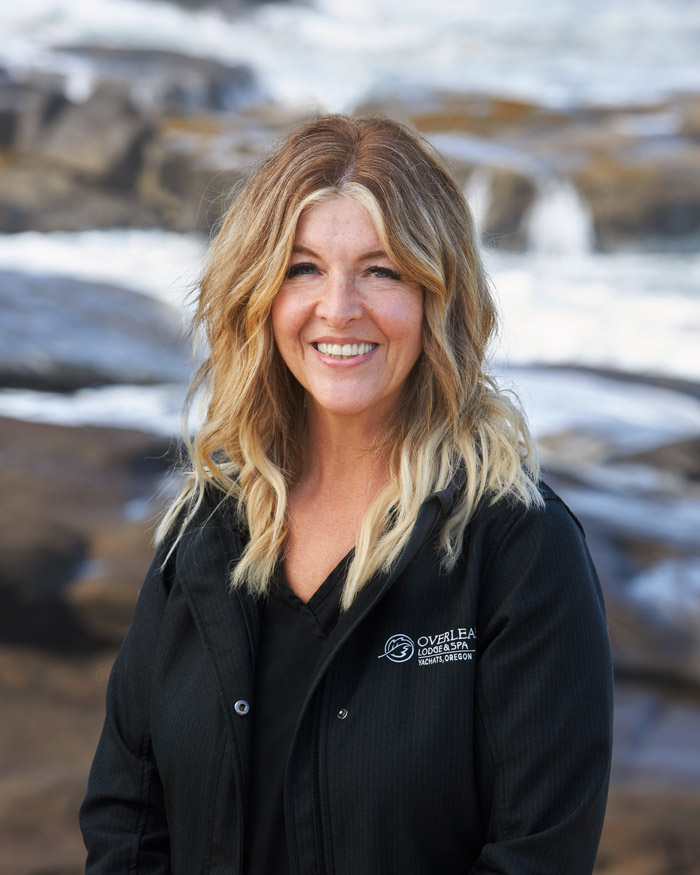 Sheila Davis began working with Fireside Motel in 1992 and has been with the Overleaf Family longer than anyone, even with her taking periods of time to do other things. Like many on our management team, she started as a housekeeper and has become an invaluable, integral part of our operation.

She, like many of our guests and staff members, understands the allure of Overleaf Lodge and Fireside Motel. “It is absolutely beautiful, and my coworkers are hardworking and will always be like family. I take pride in my job and want to offer the best work ethic to provide our guests the most comfortable and welcoming experience.”

Sheila describes her job as detailed, rigorous and most importantly, enjoyable. “The most rewarding part of my job is to hear about how much our guests enjoy their stays. My goal is to ensure that all of their needs are met. I hope they realize how much time and effort I put into my job, so that I can provide the highest level of customer service.”